The Best Way to Eradicate Poverty is Through Economic Freedom

Elections are getting closer in Nigeria, and almost every candidate has declared a “war on poverty.” Since the country is home to the largest number of poor people in sub-Saharan Africa, lifting Nigerians out of poverty has become a crucial talking point for the candidates.

Eradicating poverty has been the aim of rulers, political leaders, economists, reformers, religious leaders, and every man of goodwill from time immemorial. It is a goal shared by economists and political leaders since the days of Adam Smith and Constantine. However, the problem is not the end but the means.

Asides from the UN enlisting no poverty as one of the seventeen sustainable development goals, I bet we all would vote to eradicate poverty if it comes to a matter of referendum. But as desirable as this goal is, it leaves us with a big question: what is the best way to abolish poverty?

There are lots of papers and ideas on how to eradicate poverty. Unfortunately, the means recommended are questionable.

We’ve seen policies proposed to involve more government spending programs, but these programs will never solve the problem of poverty. They are temporary solutions that may mask the disease and ease the pain but will not provide an actual end or at least a significant reduction in poverty. These government aid programs prolong and intensify the condition they seek to cure.

The fact is that most poverty eradication programs merely aggravate the problem, especially in developing countries. Given that the number of these false remedies for poverty is infinite, considering the specific issues with each of them is complicated and far exceeds the aim of this article.

What we can say about these remedies is that they all spring from a central economic fallacy. Considering only the immediate impact of any proposed reform on a selected group of intended beneficiaries and ignoring the more prolonged and secondary effects of the remedies on the intended beneficiaries and the entire society. It is a fallacy that economist Frederic Bastiat describes as concentrating on the “seen” while neglecting the “unseen.”

What is disheartening about all this is that the popular ideologies on these matters show no advancement in solving the issue. In fact, during the same time that these anti-poverty schemes were implemented, more people went below the poverty line.

Only a free market can help Nigeria eradicate poverty

Throughout history, Nigerian politicians have searched for a cure for poverty, but the solution has been right before them. We all recognize it instinctively, which is why humans have survived for millennia. To combat poverty, individuals need to work and earn a living; as a famous Yoruba adage says, “ise logun ise” (i.e., working is the cure for poverty).

This remedy transcended from the individual level to the level of societal organization. This cure developed naturally, and without conscious planning, into a system of division of labor, freedom of exchange, free trade, and economic cooperation, the outlines of which our ancestors were unaware until two centuries ago. The system is now known as “free enterprise” or “capitalism.”

It is this system that has lifted humanity out of mass poverty. This system has transformed the face of the world in the last century, generation, and even decade, providing the masses of humanity with amenities that even kings did not possess or even imagine a few generations ago. There will always be some “pockets” of poverty, sometimes because of individual bad luck and individual weaknesses. Still, in prosperous countries, capitalism has significantly reduced poverty, unlike in nations like Nigeria.

With little foreign aid, and the absence of an ‘overreaching government’, Botswana went from being the third-poorest nation in the world in 1965 to the upper-middle income nation it is today.

Between 1966 and 1996, it was the fastest-growing nation in the world. While so many newly independent African nations chose anti-capitalist, statist routes as they emerged from the devastating experience of colonialism, Botswana’s leaders chose the path less traveled.

Botswana has prospered because it has made steady progress in securing property rights and limiting the role of government in the economy. They sought to expand the production possibilities curve by changing the game’s rules for the better.  Its economic success has helped the nation enjoy steady economic growth thanks to its decision to uphold the rule of law, protect property rights and limit the influence and reach of the government.

Today, although still imperfect, Botswana is one of the freest and most stable countries on the African continent (it ranks 3rd in Africa and 49th in the world in the Fraser Institute Economic Freedom Index). It is also one of the few middle-income countries in sub-Saharan Africa.

On the other hand, despite many programs created to eradicate poverty over the years, Nigeria remains the world’s poverty capital.

Some of these solutions include but are not limited to the 2001 “National Poverty Eradication Programme (NAPEP),” the “National Poverty Reduction with Growth Strategy (NPRGS), a strategy that has gulped over N400bn” and the 2016 “National Social Investment Programmes (NSIP).”

Some projects were also covered under the National Social Investment Programmes, including the N-Power program, Government Enterprise, and Empowerment Programme (GEEP).

We have seen that these programs have not significantly helped reduce poverty. Meaning it is time we adopted the principles of economic freedom, which have historically led humanity out of the shackles of poverty.

Nigeria can cure its devastating poverty by adopting a system of private property, free trade, free markets, and free enterprise. It was because Western civilization adopted this system more thoroughly than any other civilization in the world that it became the most productive and, therefore, the wealthiest civilization on the face of the globe.

The time has come to eradicate poverty by reducing government intervention instead of increasing it; by reducing government spending and punitive taxation. We need to improve the incentives for initiative, effort, risk-taking, saving, and investment; and to increase employment, productivity, and standard of living. 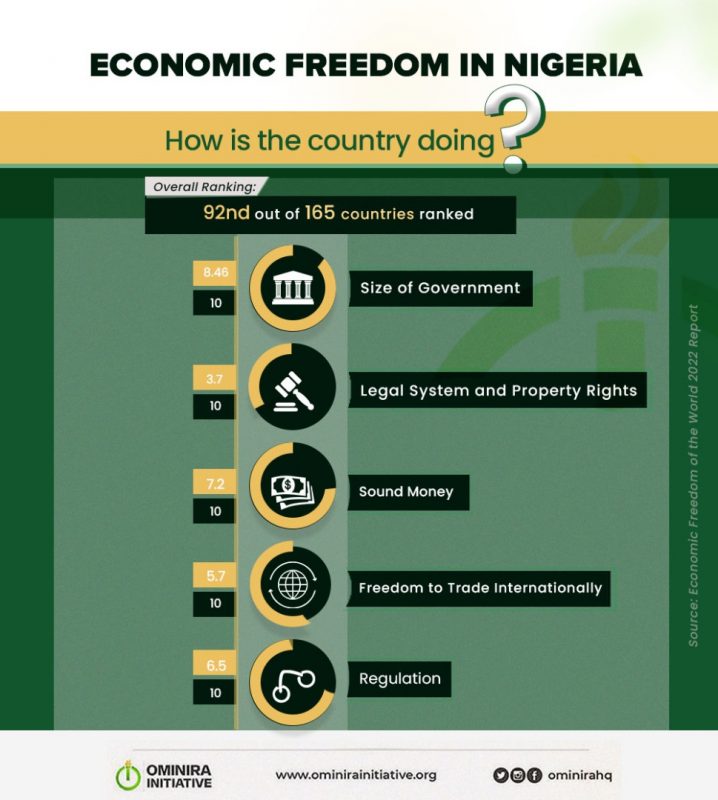